The fuel company TVEL was established to achieve the optimal structure for managing the enterprises of the nuclear fuel cycle of the Russian nuclear industry, increasing their efficiency and competitiveness in the global market. It is part of the Fuel Division of the State Corporation Rosatom and includes enterprises for fabricating nuclear fuel, conversion and enrichment of uranium, production of gas centrifuges, as well as research and design organizations. 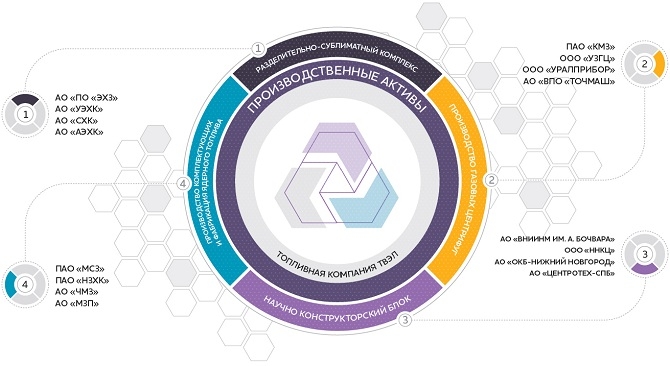 The main activity of TVEL is the production and supply of nuclear fuel for power and research reactors. The fuel company provides nuclear fuel for 74 power reactors in Russia and fifteen European and Asian countries, 30 research reactors in the world, and all transport reactors of the Russian nuclear fleet. Every sixth power reactor in the world operates on fuel produced by FCEL TVEL.
TVEL supplies a wide range of non-nuclear products to the Russian and world markets: zirconium, lithium, calcium, magnets, thin-walled pipes, polishing powders, tribute devices, zeolite catalysts, superconducting materials and other products.
At TVEL enterprises, hydrometallurgical, metalworking, machine-building and rolling mills successfully operate with their own design and research units.

Provision of a demanded package of services to increase the competitiveness of electricity generated by nuclear power plants through the implementation of Russia’s energy strategy for providing Russian design, both in Russia and abroad, with enriched uranium product and nuclear fuel enriched by the Russian design, which are being built and planned for construction; access to the international market with nuclear fuel for reactors such as PWR, BWR.

The conquest of 30-32% of the global market for products and services of the initial stage of the nuclear fuel cycle by 2030 due to the production of products with high consumer properties that allow FC “TVEL” to retain and expand its presence in the market of enriched uranium product and nuclear fuel.

Translate »
Back To Top
X